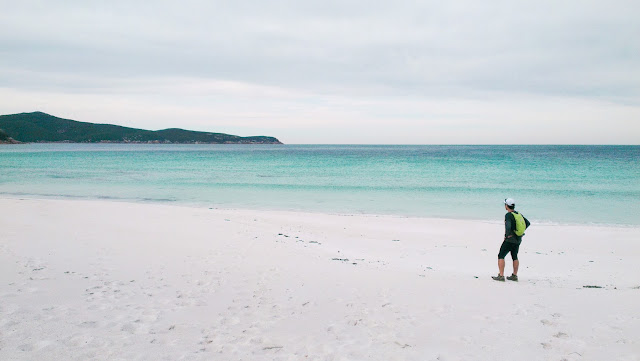 I still can't get over this sight!

I mean - I expected nice beaches & waters... but not pristine white sand & really blue waters! this wasn't even a remote island in the middle of the pacific. This was not even secluded bay, this was in fact just a local national park.. granted it'd be a bit of hike to get to this particular spot but still ~ point being, the sight was quite unexpected for a popular NP..  I guess that explains why my colleagues all said they loved Wilsons Prom.

In fact the Prom 100 organized by RunningWild is taking place this weekend - it was my intention for us to do our first ultra together during this event but due to planned burning at the park (to minimize bush fire risk) it was subsequently postponed to this 18 May weekend. In fact most of the tracks were closed except for the one we intended to run... lucky us.

THe plan was to run from Telegraph Saddle car park to Telegraph Junction, head east towards Little Waterloo Bay & Refuge Cove until it's time to turn back.


Captured some videos of the missus in action on the return leg... and the winds were picking up too


Chocolate break as we sought refuge in the Leprechaun Forest...
watching the eerie branches sway to the high winds.. a bit boliao video this :D

I was totally knackered after the run - was doing my best at the final trudge uphill at a decent pace.. the wife was also going strong.

I hope we will be back one day to run as far as Sealers Cove - our adventure brought us as far as Little Waterloo Bay which I think is a good first stab into our appreciation of Wilsons Prom & what it has to offer in terms of trail running.

Thanks for reading folks!

SO.. the wife dropped by Melb for a week & that could only mean one thing to us (these days).. WHAT RUN SHALL WE SIGN UP FOR!

The only run event that could fit her schedule was 'Run the Rock' and so well.. we ran the Rock! Well it was for charity & the fact that the wife was arriving the very night before meant we couldn't possibly impose any pressure on ourselves :P, we were just gonna have fun. But of course we always say that - and in actuality - the wife ended up running at a half-marathon PB pace... thanks to me of coz and I was actually the only one truly running for fun (ie. could've gone faster :P) but ya know *pfftt..* whatever.. :D

The last 1km or so we were running on grass and it kinda reminded me of the old cross country we use to do in school.. and this promptly takes me down memory lane where back in Secondary 1 we had our first cross country during the orientation (where the PE teacher sussed out potential school runners).. and the top 10 runners got chosen (traditionally) to be in the school team. Guess who came in 10th?? :D

And guess who was subsequently rejected coz 'this boy's bit big' and 11th place got chosen instead??? :(

Yep. I could've tapped into my inner runner aggggeeess ago but no.. I was made to wait 20 years.

Best moment - pulling into the final 1km, we were behind an elderly 19k runner, and in the mix there were runners from other categories, 10k, 5k - and well, in front of us were some 'bigger' ladies who were just walking... and we had to manoeuvre around them etc. the elderly man turned round to me & said 'It's like running past cattles!'

Run impression - I would say it was a good flat simple no fuss route - minimal real 'trail' trail.. all pretty civilised. Well organised of coz. Fruit bars + water as we crossed the finishing.. spot prizes & stalls were set up. Nice day. Was a tiring drive back to Melb plus the heavy fish & chippy lunch we had.. & the glaring sun.

But it was nice to run with the missus again. always nice to be the man behind a woman slowly breaking all her PBs.. :)