Well I hope to cover some points not mentioned in UD's product websites - pointers which I only learnt after buying & trying it out for myself (so far 2 runs with this vest). And just quick cross-checks against what the product description promises..  HERE WE GO:

Sizing is important & tricky in a way. Website says to measure your chest size with clothes you intend to wear - but of course, you don't always wear the same clothes (eg. summer vs winter). I have chosen a M/L pack & it is kinda borderline for me in terms of fit when I strip down to just a running t-shirt & compression gear underneath (I'm 96cm chest size with just a tee on) - with my chest size, it should rightfully be a straightforward decision of choosing the M/L following the website's instructions.

As it is now, when I wear the UD with min top on, the UD's upper strap is over my chest & pulled to near maximum; while the lower strap is just over the bottom of my rib cage & pulled to around half way. I wear it like this not only becoz it fits best this way but also to have the UD bottles closer together & nearer to my body central core (minimize bounce & sway etc). When I have my jacket on - esp the thicker ones - the fit becomes better. Here are some pics:

So it is my opinion that if I was 91.4cm in chest size (if you follow website instructions) - the M/L might be bit too big unless you have extra layers on. Or if you anticipate you would wear the chest straps lower.

The bottles are 591ml bottles each. Quality makes. The "kicker-valves" snaps up/down & it is great if you use electrolyte tabs that's effervescent with water - because you can pop the tabs in as you run, leave the valve snapped up to allow the released air to escape (instead of building up pressure). The valves won't leak either so no worries there. Drinking - you do have to semi-squeeze & semi-suck on the valve in order to drink.

One of my bottles was not as well made & leaked whenever I squeezed it slightly (without biting the valve). Had to resort to plumbing teflon tape to solve the issue, so bit of my useful tip for you in case you're unlucky: 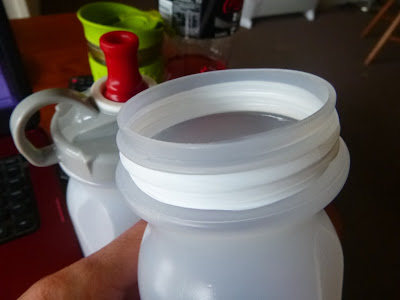 OK.. it is to my greatest horror that UD is now offering this pack WITH a 70oz reservoir.. (I have just checked their website) HORROR HORROR HORROR. I clearly bought mine earlier & it came without.. WTF. I'll share some pics here anyway on how the bladder/reservoir would fit:

The elastic cord that holds the bottles in place - there are two:

Top cord - loops round the bottle. If you have used other bottles (as I have) & ended up stretching the cord a bit too much in order to hold that other bottle in place - the cord WILL lengthen over time (as shown in far right pic) and lose its elasticity. So just bear in mind. Good thing there is the bottle pouch cord that is a draw-string mechanism that should function independent of cord's elasticity.

Who is Peter Bakwin?

Love it. Does everything it says it does on the label. Those contemplating should get it, especially now they're offering with 70 oz reservoir.. SIGH.

Fav bits? Cuben fiber keeping my stuff dry inside the main compartment. Elastic & breathable side pockets - while not exactly easiest to reach, it is ideal place for my car key + mobile phone. The elastic mesh held up my sandwich lunch pretty well too!

Hope this review has been helpful! Enjoy your UD vest!

Email ThisBlogThis!Share to TwitterShare to FacebookShare to Pinterest
Labels: Product

Sorry its a bit short!

Posted by bineus at 3:20 PM No comments:

The wife first asked me back in April whether we're gonna run the You Yangs & I remember saying I'd run it coz the name sounded funny! ha.. we weren't sure whether we would be ready to tackle our first 50k - I did want us to have our Ultra Initiation together, but the run was just a few days after the wife's scheduled arrival in Melb & it would be in the dead of winter as well. I had doubts, so did she. Maybe 30k then.. that was the unspoken decision we seem to have left it at.. :)

But of course we secretly wanted to start running ultras, few of the fancy trail runs I had lined up for the rest of the year are trail ultras - we def needed to get started (just to qualify!). After having the opportunity to check out the You Yang trails with Gary & friends - the decision was finally made to stop waffling & just do it.. bring on the 50k! (Gary did say he would unfriend us if we didn't so we really had little choice :D)

To be honest - not much thought went into how we were gonna run the 50k.. I was more concerned that I haven't prepared enough thermal sports wear for the wife. If the weather forecast came true, she would've been jumping straight into lashing winter rain & winds during the run, I really did not think any target was necessary - as long as we gave it our best shot?.. (but I know she had secret target of her own!) so my race strategy was pretty simple:

With the unexpected blue skies, we were off to a slow start - the 50k runners were all forging ahead steadily & we were definitely part of the last few slow-pokes - it was still cold, & we were convinced we'd be keeping our jackets on throughout the run (rookie mistake) that we pinned our bibs on the jacket itself (also we were following the race brief stating that bibs must not be pinned on shorts - such newbies)

And of course I ended up stripping off the jacket (had to repin the bib on my shorts) around 8-10k into the run.. all was good first 20k. 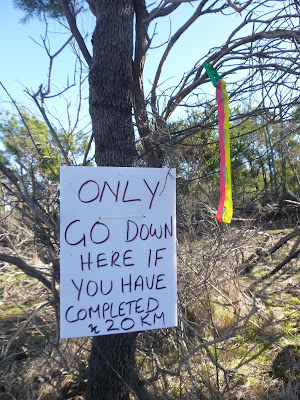 Leaving Flinder's peak & leading towards 30k, the poor wife started to have signs of cramps on the quads - she certainly felt frustrated & naturally soldiered on as she always does. I didn't want her to push herself too hard & told her if it was hurting v bad we could always stop. But of course she wouldn't hear of even contemplating a 'DNF' - (it was actually my secret tactic to fire her up kakaka..)

We made it up Flinder's peak the 2nd time with vonsy hobbling & stretching & I was proud of her trying so hard. But with 20k to go - I really did not expect her muscles to hold up all the way & kept asking her to sip on the electrolytes...

Leaving the aid station at the foothill of Flinders, we had another half-marathon to conquer. If we could sustain a slow but steady pace - we'd still be able to make the cut-off for sure. It was now purely keeping the flow of electrolytes & sugar & carbs into her system going & letting her mental do the rest :)

It didn't cross our minds at that point there was still the steep climb up Saddleback that was waiting for us.. until we were faced with it:

Much to our relief - vonsy seemed to have found a mini 2nd-wind as we left Saddleback & entered gum tree territory.. she was able to stay running & we were slowly picking up pace!


SO WHAT A DAY IT HAS BEEN.

We've literally spent the whole of Sunday just running - how many crazy folks do that except the lovers of ultra-running.. and on that note we've been in the company of such strong runners & it's great to have achieved our first ultra together in their presence.

It excites us as newbies to the ultra-scene but really I'm just happy we've finally done it, we've talked about it for ages & it's just added bonus we're making new friends along the way in a sport we both love, it's a blessing. No other way of putting it :)

Certainly we've got a score to settle improving our 50k time so onward to the next run!!

Thanks for reading folks!

ps. Oh yea.. we did anticipate that our poor lil garmin watches would struggle with battery life & so we took turn to record the run - 25k each! But i think if we're gonna get serious bout running ultras, we'll need newwwwwwwwwwww watches.. it's most unfortunate.