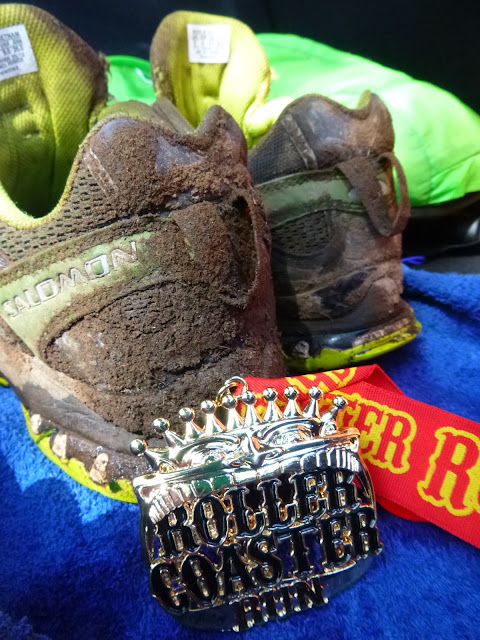 Much pain? You betcha.
Made the cut-off? You BETCHA!

Proud of my run? Well...... :) the only reason why I'm not exactly jumping with joy is only coz 1. I really can't - legs are bladdy sore & 2. I had hoped for a sub-6 hours finish :) but in all honesty yesterday could've easily been a very different story if it wasn't for the weather & all the adjustments I made following my route survey on Monday. So really I have no grounds for complaints doing the official time of 6:07 (having said that Garmin clocked a sub-6 for 43k! :P). I'm especially proud that my 21.5k was sub-3 (2:47)... I felt good throughout & started the 2nd loop being in the best possible form I could be in. So that much deserves a personal pat on the back :)


0-20k. I was part of 2nd wave, & started at the back of the pack. No rush really. The weather was fantastic. Cloudy & cool at around 16 degrees with hints of drizzle. Flag off for us was around 0720 & it was all good for the first 20k. Paced myself accordingly, stuck to the plan - run the flats & downhills, fast walking for the ups & marching small steps for the steeps. Might have pushed a bit too hard on the uphills (15k onwards), but was pre-occupied with making the 21.5k cut-off with a decent time - wasn't even thinking much about 2nd loop at this stage.

20-21.5k. The Kalorama bend & the final 1.5k turned out to be very technical trail for 0.5k & just pure steep uphill slog back up to the starting point at Skyhigh. Legs were doing good (I love technical trails! as opposed to a runner who gave way saying he 'hates all these technical shit' :D). It rejuvenated the legs too for the last 1k uphill where I was still able to run small sections of it. In the end I clocked in at 2:47 for 21.5k, not too shabby compared to the tormenting 3:15 on the Monday before.

21.5k. Spent a bit too long prepping for 2nd loop before setting off again. Chatted happily to the volunteers who were very helpful & friendly. Refilled the hydration bag, electrolyte drink, prepped the headphones for some music & grabbed a gel on the way out again. With Foo Fighters pumping in my ear, it felt like I was in best possible shape to tackle the 2nd loop!

21.5-28k. Legs were coping well with the downhill up to 26k when I felt the inner front quads pinching just a bit.. signs of things to come I knew. Came across a handful of some of the 43k front runners returning to Dongolla after Golf Course Track.. I applauded them & now having seen the results the top spot female runner Isobel Bespalov was definitely amongst this bunch of runners.. they were just happily blazing along. how cool.


28-35k. I trudged along for all the uphills, trying my best to keep up with the group of runners I was with.. many exchange of positioning took place along Golf Course Track & the runners were also slowly spreading out. My legs started showing some signs of cramping & I decided to walk a fair bit of it. I kept sipping on the electrolyte drink & hoping it would slowly go away. Pulling into Dongolla water station finally I quickly prepped a fresh bottle of electrolytes.. grabbed a gel, downed a cup of coke & I was off again.. tried not to stop too long.


35k-40k. The climb at 37k was torturous. A stark contrast to how I felt during the first loop. I was just glad the legs were still able to jog ever so slowly on the flats & downhills. On the uphills I had to stop many times to prevent the accumulation of lactic & took in smaller portions of gel & smaller sips of electrolytes more regularly. I took time to soak in the views (eg. along Old Mountain Road & Kyeema Track leading back to Skyhigh) & it was here I remember laughing to myself becoz James Brown started singing 'shake your money maker' on the iPod.. I found it funny coz I really was in no physical state to do that :D.. it was nonetheless a very welcomed distraction :)


40-43k. Just as the Garmin watch lapped at 40k, it beeped 'Low Battery'. I was like 'seriously??'. Of all times. But having reached Kalorama the end was near. It started to drizzle quite heavily too. It was nice to have rain waking me up but the technical 0.5k wasn't as fun anymore. In my crawling speed I noticed mist had formed near the tree tops & it was a truly beautiful sight. What a shame I didn't bring my camera with me (I left it coz I knew I'd be distracted from the run!).

At the final 300m, Rohan the organizer was out to greet runners, he offered gums & sweets & asked me to cartwheel over the finishing line. I told him I will try if I don't end up cramping instead. :) The crowd had thinned significantly by now. The MC called out my name as he saw me running slowly round the bend & with the small crowd cheering I did a pathethic flying side-kick over the line.. hopefully no photographer took me doing that :P

And so. 6 hours 7 minutes of mental & physical anguish later, the race was finally over. I guess I can take pride that I had stretched just outside of my target 6 hours, & well within the cut-off of 7 hours. I certainly gave it all I have (& good on the old Garmin watch staying alive to the very end too).


Standard of Run by the other runners was very high (for me). Average for the 43k was 5:30hours (holy crap!). And seeing the 43k folks out there pushing their bodies to the max & chugging up the hills non-stop was just remarkable.. I did not see any of the folks I ran with stop for one-second, at most just slowing down at certain stretches & of course at the aid/water station (& all just very briefly too). So yea. Hats off to all of them.. all were hard-core folks in my books.


Event Organization was commendable. Free parking at Skyhigh. Sun protection-lotions for runners. Volunteers were dressed up as clowns, helpful & always cheering.. the main drink stations were a-plenty with water + sports drinks + coke + gels.. Dongolla even had cake. There were a few photographers busy snapping away (yet to see any of their posting tho) so if I'm lucky might even get a nice photo of myself. So yea.. for route support, double thumbs up!


The atmosphere for the 43k finishers was naturally less fantastic compared to when the 21.5k folks finished. We were only a 100+ strong contingent unlike the masses for the 21.5k. Also it did start to rain at some stage. Only regret if I had to be picky is that I didn't manage to explore Mizuno / any other sponsors - by the time I changed up, the party's kinda over & organizers were all packing up for the day. But no biggie really.

Would I do it again? Probably....... and that's a big probably. It's a tough trail to train for & it was good to be able to pit myself against some seasoned pros. I know now I'm 30mins off the average time & a good 1:30 to 2 hours behind the top boys. Long way more my friend. For now - I'll just take pride with my result & wished I had 1 more day to lie in before hobbling into the working week.. bleh.

Thanks for reading folks! Time to plan for the next run :)

Not quite ready for this onslaught - & well proven too when I went out for a 21k test run yesterday. I would be extremely lucky to make the cut-off, and need to plan my energy & hydration recovery very well if I were to survive the 2nd loop..

The slopes in the final few kilometres are not runnable by my standard. I know the final 5km will be at an absolute crawling pace.

My excuses for yday would be - I was running in the sweltering heat of 36 degrees & in the height of the afternoon. I didn't bring enough electrolytes. I was carrying extra weight which I won't be carrying on race day.

I also wasted time getting a bit lost here & there... and at least 10mins recording myself running :P all of which should shave off another 15mins from my recorded time. Allowing me to make the cut-off albeit cutting it way too close.

I can't say it's unexpected, this pain. Given I've not trained in the terrain before until yesterday. It's not even about the standard of run (which will be v high), I know I fight my own battles.. it's just that I wish I didn't feel so weak u know? it's as if all the running I've done to date is pathetically insufficient.. that's the more annoying thing to deal with.

Oh well, we'll see. One thing's for sure - the rollercoaster is no child's play & deserves serious attention. Anyway here are some pics of my adventure/torment yday:

Posted by bineus at 6:08 PM No comments:

I can't think of a better way to see the iconic Harbour Bridge & Opera House for the first time :) I was secretly glad that the hotel booked was close enough for me to squeeze in a nice morning run during my short work trip.

The weather in Sydney was very nice too, mid-20 & being close to the sea, it was cool & breezy at times. Less stifling compared to what we're going through in Melbourne now. Was fantastic to see early riser runners abound..

Email ThisBlogThis!Share to TwitterShare to FacebookShare to Pinterest
Labels: Sydney

Thought this was pretty useful... been trying to focus on a few things during my runs which were mentioned here.

In summary, it's still the main few points, we want to be doing midfoot/forefoot strike when we run, a low heel-drop, neutral + flexi shoe helps. The idea is to run relaxed, run light & 'over the ground' or 'running on egg shells' as described in the video.. & staying in this manner while pushing your cadence to go faster during your speed intervals (eg. fartleks etc.)

Two type of Drills were suggested:

Email ThisBlogThis!Share to TwitterShare to FacebookShare to Pinterest
Labels: Technique

Some running songs in my collection to help pump some blood into them wearied legs.. :)

Be warned some songs are not suitable for minors!!
Posted by bineus at 11:39 PM No comments: